The Ghana Catholic Bishops Conference has called on the leadership of the two major political parties, the New Patriotic Party (NPP), the National Democratic Congress (NDC), and their supporters to exercise restraint and avoid all forms of violence in the aftermath of the declaration of the presidential and parliamentary election results by the Electoral Commission.

The Bishops are asking political parties with concerns to seek redress in court.

This comes after the NDC and its flagbearer John Dramani Mahama rejected the election results as declared by the chairperson of the EC, Jean Mensa, accusing the EC of rigging the polls for the incumbent President, Nana Addo Dankwa Akufo-Addo.

Since the rejection of the results, there have been pockets of demonstrations by supporters of the NDC in some parts of the country.

Reacting to this development, the Bishops in a statement noted that: “Having monitored recent development on the political scene after the declaration of the result we wish to humbly appeal to all who have issues with the result to kindly address these issues through the legitimate procedures for redress.”

The Bishops also urged the Electoral Commission to keep engaging all political parties to ensure that all outstanding electoral issues and grievances are dealt with in the interest of the country.

“Aware that in every competition there are bound to be winners and losers, we wish to call on all stakeholders to exhibit maturity in accepting both defeat and victory. In this way, reactions to any of the two conditions will be measured, modest and charitable towards one another,” the statement said. 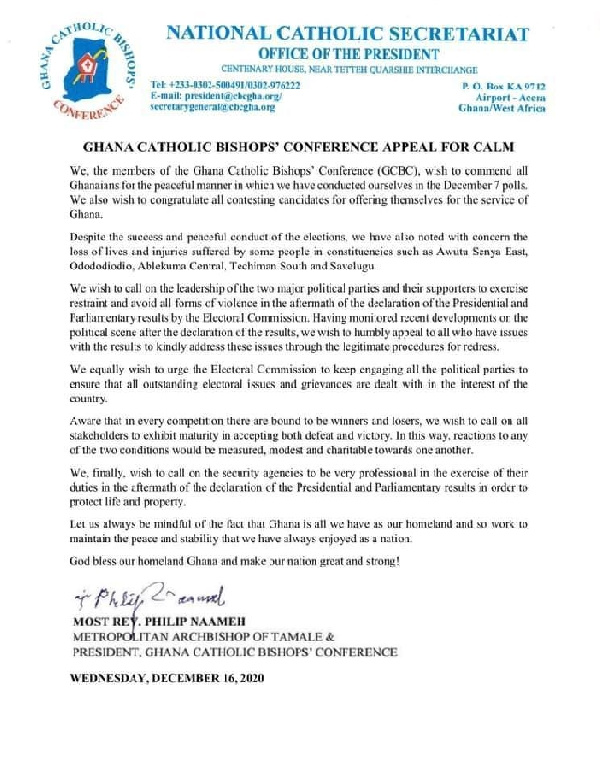