The Christian community in Ghana, including some Muslim clerics on Sunday evening [March 21, 2021] converged at the Burma Camp Worship Centre auditorium of The Church of Pentecost in Accra to seek divine intervention against the activities of Lesbians, Gays, Bisexuals, Transgender, Queer, and Intersex Right (LGBTQI+) movement in the country.

Under the distinguished chairmanship of Apostle Prof Opoku Onyinah, Chairman of the Governing Board of the National Coalition for Proper Human Sexual Rights and Family Values, echelons of the Christian faith in the country led the gathering to pray earnestly for the power of God to stem the activities of the LGBTQI+ movement in Ghana following the recent uproar in the country due to the official opening of the LGBTQI+ office in Accra. 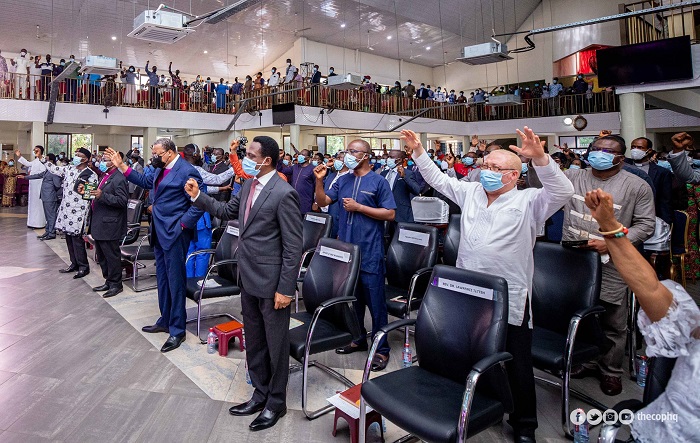 Among the prayer topics was the call for sharper and clearer legislation on LGBTQI+ in the country and the rehabilitation, guidance, and counselling of repentant souls as well as education on proper sexuality.

The Chairman of The Church of Pentecost, Apostle Eric Nyamekye, who opened the prayer session, stressed the need for Ghanaians to intensify their prayers for God to rescue the nation from the forces behind the LGBTQI+ movement.

“If there was a time that this nation needed to pray to seek the intervention of God, it is now,” he said, adding, “If we want the country back on morality, then we must get on our knees. The value of prayer no one can measure.”

Giving the purpose for the prayer rally, the Presiding Bishop of the Methodist Church Ghana and Chairman of the Christian Council of Ghana, Most Rev. Dr Paul Kwabena Boafo, said that recent events in the country “clearly suggest that the nation is under a siege. What we hear and see coming into our nation is like a siege and we must stand against it. We know that human mind and ideas cannot fight this battle.”

He charged Christians to “speak to God in prayer and the Lord will hear us and come to our rescue.” “We are here to deliver this nation from the hands of the evil one. We know him as the God who hears and answers prayer,” he added as he read from Psalm 91:15; Isaiah 58:9; 65:24, and Luke 11:9, indicating God’s promises to his children.

Apostle Prof Opoku Onyinah, Chairman of the Governing Board of the National Coalition for Proper Human Sexual Rights and Family Values, said that the Coalition views the LGBTQI+ movement in Ghana as “an upfront to our long-cherished religious values, customs, and traditions as well as the laws of the land.

“The actions of the LGBTQI+ is also completely aberrant with the laws and principles of the Almighty God, especially concerning his plan of creation and the sanctity of marriage between man and woman.”

He expressed the Coalition’s appreciation to the President of the Republic, Nana Addo Dankwa Akufo-Addo, for declaring that his administration will never allow the legalisation of same-sex marriages in the country. This declaration, he said, consequently led to the closing down of the offices of the movement, of which the Coalition is grateful to the President.

“We wish, however, to put this forward; we advocate that Ghana’s stand on the LGBTQI+ will be legislated clearly without any ambiguity.

Touching on the negative impact of the practices of the LGBTQI+, Apostle Prof Opoku Onyinah said that there is enough evidence to show that the lives of many young persons have been ruined in the countries where they operate. “The lives of the youths who are future leaders of these countries are being destroyed,” citing the Gay, Lesbian Medical Association website to back his statement. He added: “We learn from peoples and countries’ success stories but not their destructive stories. He, therefore, called on all concerned Ghanaians to rise to resist the activities of the movement.

The Chairman of the Parliamentary Christian Fellowship, Hon. Emmanuel Kwasi Bedzrah, who represented the Speaker of Parliament, Rt. Hon. Alban Kingsford Sumana Bagbin, disclosed that a group called ‘MPs Against LGBTQI+’ has been formed in Parliament which has issued a statement on the floor of the House against the activities of the LGBTQI+ movement in Ghana.

He stated that the group is introducing a Private Members’ Bill which will once and for all define what Carnal Knowledge and Homosexuality are. “We Christians should pray that the Bill will go through smoothly so that we will have it passed by the close of the year. We pray that no MP will oppose the Bill,” he said, adding, “The Speaker of Parliament has graciously agreed to meet with us including the clergy to start the process of the Private Members’ Bill. He has given his full blessing to the Bill.”

“Fighting this battle cannot be done alone by us in Parliament. The movement will do everything they can to frustrate us because it is an end-time thing. We should brace ourselves up for the battle ahead,” the MP pointed out.

The Personal Assistant to the National Chief Imam, Dr Mohammed Marzuk Abubakar Azindoo, declared the Chief Imam and the Muslim community’s support for the effort by the Christian community to nib the activities of the LGBTQI+ movement in the bud. He called for clear-cut legislation to criminalise the practice of LGBTQI+ in the country.

There were solidarity messages from the traditional authorities represented by the Ga State and the Journalists Against LGBTGI+.